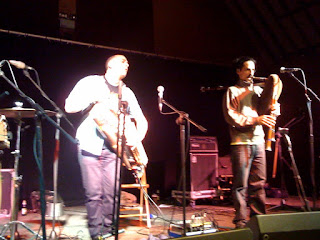 Posted by Michael Shade at 00:59 No comments:

Leon Rosselson voices his frustration on 13 years of labour rule and an imminent Tory government. Words, music and video: Copyright Leon Rosselson 2010.
Posted by Michael Shade at 21:02 No comments:

A wasted vote or a nasty shock? 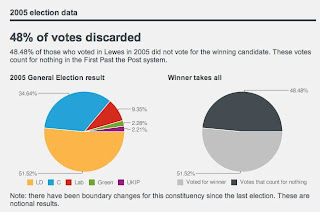 If 48.5% of Lewes voters didn't vote for the winning candidate in 2005, then 51.5% did. The Liberal Democrats won the seat with an overall majority of the votes, which sounds reasonable to me.
What statistical presentations like this leave out is the politics. Lewes was a 'safe' Tory seat until 1997. In that election many Labour and Green supporters took electoral reform into their own hands, and voted tactically for the Liberal Democrats. We've had a Lib Dem MP since then, he's been a good MP and he's maintained his seat. The same has happened in many constituencies around the UK - many voters have been able to use an 'alternative vote', even within the existing system, and have managed to influence the outcome.
If people think their vote is going to be 'wasted', they will be less likely to vote. If they don't vote, they're leaving the decision to those that do - and they may like the result even less.
Beware - don't take the politics out of politics - you might end up with a nasty shock.
Posted by Michael Shade at 00:04 No comments: