It's not all walking

Today is the 80th anniversary of the Kinder Scout Trespass, a mass action whose repercussions led to the formation of the Ramblers' Association, and the creation of the first National Park in the Peak District in 1949. We owe the 'right to roam', which we now take so much for granted, to actions like this.

There's a lovely little 'In Praise of . . . Benny Rothman' in today's Guardian - Benny, a keen rambler and cyclist, then aged 20, was the driving force and principal leader of the trespass. He died 10 years ago; you can read an obituary, or go for the full story from the Working Class Movement Library, which I highly recommend.

The Guardian's 'In praise of . . . ' piece says that Benny had "a rare combination of being able to imagine a different way of organising society and a willingness to fight for it." Not so rare, maybe - they bred them like that in the 1930s, my aunt Margaret Stanton, for example.

I went to Kinder Scout for the first time last year - on my birthday, which was nice. We walked for an couple of hours, but didn't have time - or energy - to go right up to the top; nevertheless it was wonderful just to breathe in the calm and timelessness of the hills. Thank you, Benny.

Posted by Michael Shade at 18:51 No comments: 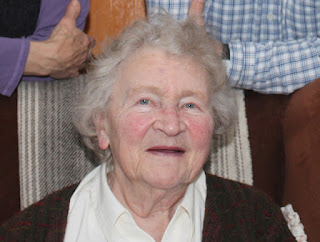 My Auntie Margaret died two weeks ago, and we had the funeral on Tuesday. What a day! What a life!! She was 93, the last of her generation in our immediate family, and had spent the last 75 (seventy-five) years of her life deeply involved in local politics, trade union activity, and every international solidarity campaign you could donate a pound - or more importantly, an hour - to.

From support for the Republican Government during the Spanish Civil War as a teenager in the late 1930s, to trade union organisation in war-time factories; she was a Communist Party candidate in post-war elections, and met Paul Robeson in support of the American Civil Rights Movement before anyone knew it was a civil rights movement (1949). She organised for the Anti-Apartheid movement across several decades, for Justice for Zimbabwe against the white supremacists in the 1960s and 70s, against the Vietnam War, for the Chile Solidarity Campaign after the Pinochet coup in 1973, and more recently against the Iraq war. She played a leading role in defence of the Health Service in Birmingham and later Oxford, and was awarded the TUC Gold Medal in 1996 for a life-time of service to the trades union movement.

When we saw her a couple of years ago she apologised for no longer "being as active as I would like to be" - aged 91 - nevertheless every seat in the room was covered in the piles of loose papers and cuttings that had always served as her current filing cabinet. And throughout she was a wonderful, caring mother, and for this nephew at least, a lovely aunt. Apart from anything else, she gave me my first typewriter - a little portable, already hammered into the ground - and got me my first job.

David, Richard, Jenny, Katy and Rebecca conducted the service, as they had done for Uncle Mick 10 years ago. People said she was "an example to us all" and a "hard act to follow". We sang the Internationale, and Nkosi Sikelele Africa - well, we tried, I was too choked to get the words out. But I hope she heard us nevertheless.

Katy made a lovely little film with Margaret a few years back, called Lady in Red. It's on the BBC Oxford website, along with a radio interview with her.
Posted by Michael Shade at 23:26 No comments:

The Murals of San Isidro Over last weekend scores of artists were invited to cover the walls of houses in San Isidro, one of the poorest quarters of Orihuela (Spain), with the enthusiastic agreement of the people of the district. All the murals have a Miguel Hernández theme, to do with the man, his poems, or the times he lived through. The project was launched to mark the 70th anniversary of his death, in prison, at the age of 31.

The walls had been painted once before, in 1976, a few months after the death of the dictator General Franco, and before the end of censorship and the fascist police-state. The police had tried to prevent people reaching the town, but many managed to get in and get their work done quickly, quietly and in the dark.

As you can see, conditions this year were very different. Work started on Friday afternoon, and had to be finished by Sunday lunchtime; these pictures were mostly taken on Saturday afternoon, with work very much still in progress.

One of the most striking pictures is a version of Picasso's 'Guernica', originally painted in 1937 to represent the horrors of modern war. It has been painted by a team of artists, on the curved wall of a house at the entrance to the district, and will hopefully serve as an emblem of the city for years to come.


NB: there are 100 photos - you can view a slideshow, or navigate through the set

Posted by Michael Shade at 17:43 No comments: