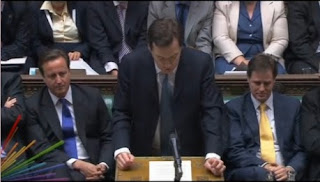 The happy phrase is Nick Passmore's, not mine. Here they are, delivering what they patronisingly term their 'Comprehensive Spending Review'.
There are actually four Toffs in this picture, although we can only see three of them unless we really know where to look. And please don't strain your eyes trying, you'll only end up at the optician's, and it'll cost you a fortune, even more than a bus ride.
Two of them are also Turncoats. Turncoat No.1 can be identified by his subtle yellow tie; along with Toff No.1 he is attempting to nod sagely at what he wants us to think are the words of wisdom of Toff No.2. And Turncoat No.2? Well, he's hiding behind Toff 2; we surmise he's licking that part of 2's anatomy nearest to him, as he has been doing for the last 6 months.
Toff 2's speech can roughly be summarised thus:

We and our kind got us into this mess, so you lot are going to have to get us out of it. We're all in this together, but we know our place, and we know yours as well. This is going to hurt you more than it hurts us. That's what we're here for. We're looking after our lot, you can look after yours.

Jobs, pay, pensions, welfare, transport, health, education, arts - even the police and the armed forces - all trashed in an orgy of smug, smarmy, hypocritical, prevaricating self-righteousness. And aimed disproportionately at those least able to withstand it; but they're not likely to vote Toff anyway, if they vote at all, so what do they matter?
Someone described it as a performance of smoke and mirrors - how apt. The Toffs manipulate the mirrors, trying to get us to believe that less is more, down is up, cut is paste; meanwhile the Turncoats pump away at the smoke machine, hoping to prevent us from seeing what's going on.
And on a personal note - Oi, Norman - were you listening to this garbage? Are you going to vote for it? Or are you going to use your loaf?
Posted by Michael Shade at 02:16 No comments:

Sorry, that should read "The legendary" Paul Brady - Saturday 26 February at the Town Hall, Lewes. We get nothing but the best :-)
More info from SpyBoy. Music to our ears indeed!
Posted by Michael Shade at 13:58 1 comment: 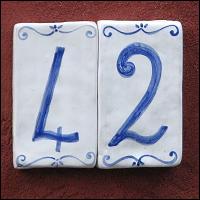 Today's date is 10-10-10.
101010, as a binary number, is 42 in decimal.
'42' is the 'Ultimate Answer to the Ultimate Question of Life, The Universe, and Everything', as explained by Douglas Adams in The Hitchhiker's Guide to the Galaxy. So we know the Answer - however we can never find out what the Question was. How like life.
The original radio series was first broadcast by the BBC in 1978, at 10:30 on Wednesday evenings. I recorded each instalment on cassette, and I still have these recordings somewhere - though they'd probably disintegrate if I tried putting them through a cassette player now. Anyway, they're all available on CD, digitally remastered and no doubt in much better quality. Then there are the books, the film, the DVDs.
If you're sceptical about all this, just search for "the answer to life the universe and everything" and you'll see that Google's calculator gives you: = 42.

So it must be true.
Hitchhiker has had a huge influence on popular culture in the UK, and a number of phrases and quotations from the series have passed into common English usage.
h2g2 (HHGG, from the title) is an Earth Edition of the Hitchhiker's Guide, inspired by Douglas Adams, and run now by the BBC; it's a collaborative encyclopedia, and contains many unexpected goodies, not all related to the original Guide.
I used the tag #h2g2 on a Tweet I posted just after midnight - and it looks like hundreds of others have as well.
Elsewhere the day has been designated the 'Global Day of Doing' by the 10:10 campaign, which aims to cut carbon emissions by 10% a year for 10 years. Perhaps this is the Answer we're all searching for?
Hitchhiker fans have set up 42 Day, to encourage us to devise ways to honour the day, such as: "hop on a bus - nearly every city in the world has a number 42 bus". If you want to find out what they're doing, they are on Facebook, Flickr and Twitter (hashtag: #42day).
Special dates
10.10.10, you will have noticed, has the same digits for day, month and year. There are only 12 of these per century (01.01.01, 02.02.02 . . . 12.12.12). Most of us will only have two more of these in our lifetimes: 11.11.11 and 12.12.12, so perhaps we should make the most of them!
We also have coming up shortly another form of repetition: 20.10.2010 - or even, if we  include the time as well, 20:10 20.10.2010. And in three weeks' time there will be a palindromic date: 01.11.10; it's the second one this year, if you count 01.02.2010.
What does all this tell us about Life, The Universe and Everything? Hmm, if only we knew . . .
Posted by Michael Shade at 17:19 No comments:

Email ThisBlogThis!Share to TwitterShare to FacebookShare to Pinterest
Labels: #42day, #h2g2, 10:10, answer to life the universe and everything, dates, Douglas Adams, Global Day of Doing, Hitchhiker's Guide to the Galaxy, palindromes

Show us some values, Ed

A letter in The Guardian calls for the new leader of the Labour Party, Ed Miliband, to live up to his promise to base foreign policy on "values, not just alliances", by declining to become a patron of the Jewish National Fund, which raises money for the purchase of land for Jewish settlement in Israel and the Occupied Territories. The letter accuses the JNF of complicity in the ethnic cleansing of Palestinians from villages on the West Bank.
There are over 40 signatories to the letter, including Leon Rosselson, the singer-songwriter. Leon is a relative of mine, and his name caught my eye as I skimmed the page in this morning's paper. He has long written and sung of the injustices of the occupation, most movingly in The Song of the Olive Tree. Someone has recently put up this clip of Janet Russell singing it, and I would like everyone who reads the letter to listen - including Ed Miliband.
Posted by Michael Shade at 00:22 No comments: 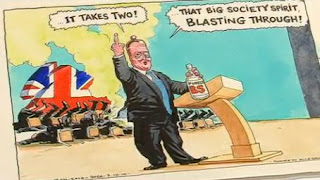 Posh Boy gets drunk on his own BS, and shows us how to count to two.
See Steve Bell drawing this, and readers' comments.
Posted by Michael Shade at 19:41 No comments: