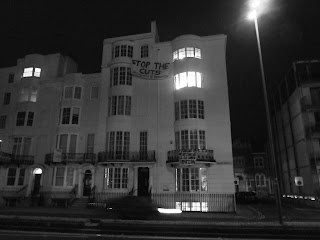 Students at the University of Brighton have been occupying a lecture room since last Thursday, in protest at the Coalition Government's plans to raise tuition fees and slash funding for teaching. Similar occupations are taking place at a number of other universities around the country, and more are likely after tomorrow's Day of Action.
I was at the Falmer campus this morning, for the lecture I do on Contemporary Spanish Cinema, and as I came away I was approached by a couple of students with petitions and leaflets.
- Excuse me, are you a student?
- Erm, well, no, actually I'm a retired lecturer . . .
- Great. We'd like to ask for your support for the action we're taking over the cuts.
None of the students taking part in the occupation have been involved in anything like it before. No-one has, since 1968. So they're learning as they go along, and they're learning fast. Marches, demonstrations, leaflets, petitions, banners; food, cleaning, and doubtless sleeping arrangements; discussions, debates, lectures; they're also reaching out to other sectors hit by the cuts. They've only been there a week but they're going full-swing.
So the Posh Boys look as though they've managed to politicise a whole new generation, in just five weeks since the cuts were announced. Big Society indeed.
The Brighton students are using social media to good effect - they have a blog: Brighton Students Against Cuts , a Facebook group: Brighton University Stop The Cuts, and a Twitter stream: UoB Occupation; the picture above comes from their image site: Pavilion Parade Occupation, and they have a video channel too: Brightonstopthecuts - see Brighton drivers honk their support:
Posted by Michael Shade at 22:57