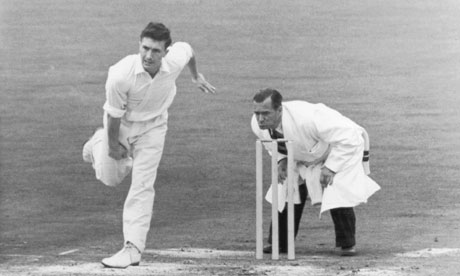 There goes another piece of my childhood. As an 11-to-12 year-old and onwards, Fred Titmus was my cricket hero because a) he was brilliant b) he was reliable and self-effacing c) he played for Middlesex d) he'd been to my school. I tried to be a spin bowler like him but could neither bowl straight nor turn the ball; I tried to be a quietly effective batsman like him but used to miss the ball more often than not. I tried to be good at what I did, and reliable and self-effacing, like him; I can only hope I've been more successful in this than I was with my cricket skills.
Every two or three Saturdays a few of us used to sit in the cheapo seats at Lords with our cheese sandwiches, squeaking out "Come on Freddie!" when he bowled. Somewhere I've still got scorebooks, scorecards and a laboriously signed autograph. And isn't it a lovely photo?
If you want to find out more about Fred, there's a smashing appreciation by Mike Selvey, who had a close association with him as a player, at opposite ends of their respective careers, and an obituary. All the stats are at CricInfo.
And he's quite probably the only cricketer to be honoured in a punk-rock song: F*ckin' 'ell it's Fred Titmus! by Half Man Half Biscuit (here's the witty words).
"Come on Freddie!"
Posted by Michael Shade at 14:03