On Sunday a group of cousins got together to do a Census Centenary Celebration Walk, around the bits of the Jewish East End our parents were born and brought up in. Ten of us traced the homes and haunts of our grand and great-grand parents, as recorded in family lore and their 1911 Census returns. Brian and myself, Jenny and Katy, Ralph and Margaret all knew each other; Gerald, Margaret and Michael knew each other but none of the rest of us; Boris knew no-one. But we all come from the families of a brother and sister, Lewis and Michla Levin, who came to London from Russia over 100 years ago. Between us we represented three of Michla's four children - Shmuel, Sarah and Myer - and one of Lewis's five - Barnett, and within 5 minutes we all felt, and acted, like cousins.
We set off to search for people long gone, and places that had been significant in their lives, armed with a handful of documents - census returns, marriage certificates, birth certificates, death and burial records, whatever we had been able to find - and heads full of family knowledge.

However, document and presumed knowledge collided in dramatic fashion before we had even left the Coffee House where we met to start the day. Everyone knew the mother of Barnett, Michael and Gerald's father, to be Annie. Everyone, especially her own sons, who put 'Annie' on her headstone. However, when Michael brought out Barnett's birth certificate, we saw that it named his mother as Mary. None of us could come up with an explanation, and we spent the day wondering how much more of what we thought we knew was going to be undermined or contradicted by discoveries yet to come.

Our route took us over the Regents Canal, which leads down to Limehouse Water and the other docks by Tower Bridge that were the point of entry for most of the thousands of East European Jews that came to London between 1880 and 1914. Just 200 yards further down Mile End Road is the site of the block - Drivers Building - where Lewis Levin and his five children (including Barnett) are recorded in the 1911 census, in four rooms. We wandered round to the yard at the back, and wondered whether the little Levins used to play there, away from the noise and bustle of the main road.

We then walked down White Horse Lane, where Barnett and his brother Nyman shared a flat while they went through college in the 1920s, and turned into Rectory Square to find the former East London Synagogue, now converted into flats. My grandparents Morris and Sarah, were married there in 1909, as were Ralph's, Myer and Marel, in 1915. The next stop was at the site of the Poor Jews' Temporary Shelter in Leman Street, where Morris spent his first night off the boat, on 2 October 1905. We stood opposite and paused for reflection.

Ralph also had recollections of Alie Street, where Marel lived for many years after Myer died. We stopped to take in the Whitechapel Library, known as the "university of the ghetto", and then turned into Brick Lane. We noted Bloom's Corner, site of many an impassioned political discussion, and made our way up past the Brick Lane Synagogue (now a mosque), Katz's String Shop (now an art gallery), the massive brewery building (an indoor market), and the chess and carrom players, to buy lunch from the Beigel Bake.

Here, quite by chance, we bumped into living history. I'd noticed an old man having a salt-beef sandwich at the counter, and when he came out I asked if he'd enjoyed his lunch. Yes, he said, it was the only place you could get real meat nowadays. We got into conversation, and he said he'd been on the massive anti-cuts demonstration the day before, though the cuts didn't matter so much for him, as he "wouldn't be needing his pension for much longer". He asked the copper in the queue if his force was being cut.

It turned out he had been a proud Communist Party activist since the 1930s, taking part in the Battle of Cable Street and later becoming a well-known and popular local councillor. Max Levitas. I'll bet he spoke a few times at Bloom's Corner . . . So did he know my father, Dave Shreibman? "Yes, Shreibman, I remember him." Our jaws dropped. We'd come looking for traces of our forebears, hoping to find a few physical reminders, a house or two, or at least a street. And here was Dad, in the memory of 95 year-old Max, who still gives evening classes at the new Whitechapel Library - on politics, of course: "I tell 'em how the Tories are destroying our country".

After lunch we located 3 North Place, where Morris and Sarah were living when they got married. At least we think we found it, it's part of Spitalfields City Farm now, maybe the little car park.

Two years later the census found them at 12 Hare Street, now part of Cheshire Street, in two rooms, with Sophie, aged 1. Brian listened out for the cry of a new-born baby - but Dad wasn't born until a week later. It's his centenary too, next week. 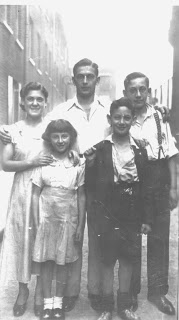 Morris and Sarah had eight children, and eventually moved round the corner to larger accommodation at 11 Grimsby Street, opposite the Shoreditch Viaduct arches. The arches have gone, as have the original houses, but this was the location for one of our iconic family photos from the early 1930s, so we tried to re-create it, incorporating Boris as an honorary Shreibman. He has potential, that boy. Jenny - Katy - Michael - Boris - Brian
Then the eight cousins had our own group portrait taken: Katy - Jenny - Gerald - Michael S - Ralph - Michael L - Brian - Boris
Our last port of call was Heneage Street, to see if we could find the house that Michla was living in at the time of the census, with her sons Myer and Harry, aged 21 and 20. All in one room. Again, the houses have gone, but the cobbles are still there, looking like they've been trodden by hundreds of feet over more than a hundred years. Including, we like to think, those of Michla, Myer and Harry.

Coming back up Brick Lane, I almost missed the drinking fountain outside the school. It certainly looks as though it could be a hundred years old. I bet they all drank from it.

We'll shortly be setting up a website - probably a blog - where we can collect together some of our family stories, and share some of the things we're finding in our ongoing hunt for documents. Family members can find more detail about individuals, and see how we all fit together, on our Geni site.

Ralph and myself, along with his brother Mark and our cousin Dan from Ohio, will be visiting Belarus in May to see if we can trace Lewis and his two mysterious wives, and Michla and her husband David (or was he Israel?) Iliatovitch (or was he Gitovitch?), and the families they came from.

And we'll quite probably be doing further East End walks in the future - we didn't do half of what we had planned on this one. And there's a Google Map with all the locations pinpointed, so you can plot your own walk if you want to.


NB: The slideshow above can be viewed full screen if you like, and you can pause or continue as you will; you can see the titles by clicking 'Show info' at top right of the photo. Or you could have a closer look via the PhotoSet.