I think we need to talk 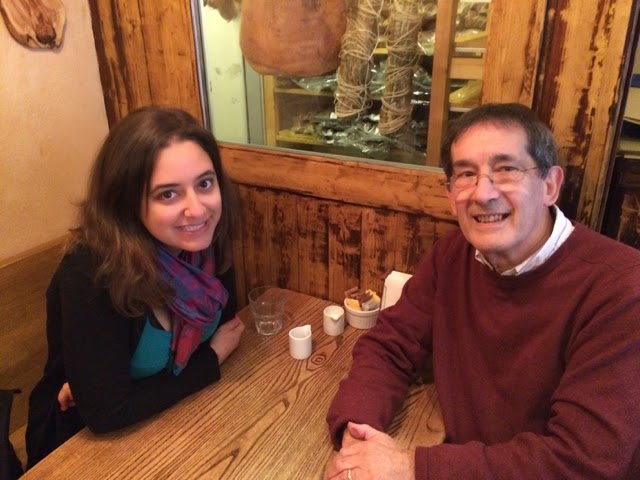 I met Cousin Joan yesterday. Well, Third Cousin Joan. She came across me online a few months ago, but this was the first time we had met - she lives in Israel, and was coming over to London for a couple of days, so I hopped on the train and went up to see her.

She had just started delving into her family history, and did a Google search for her great-grandmother, Bajla Frankenstein. Go on, try it. Second up is a post of mine from two years ago, recounting how I had made contact with Frankenstein cousins in the USA that we had previously had no idea even existed. In the post I mentioned a Bajla Frankenstajn I had found, as a possible connection between my family and the 'new' cousins.

Joan saw what I had written, and posted a comment:


"I've just started a serious genealogy project and stumbled upon this post. I am a great-grandaughter of Bajla Frankenstejn. I think we need to talk."

So here we are, talking. We compared notes, and after some scratching of heads we realised that, although I'm older than her father, she and I are in fact of the same generation - we share great-great-grandparents, which makes us third cousins, I think. Her great-grandmother, Bajla, was sister to my great-grandfather Jankel Josek. She was 13 years younger than him, and his lot seem to have been quicker off the mark than hers in each succeeding generation.

Joan brought with her an absolute jewel of a photo album, which had been her grandparents'; it had scores of photos from before the Second World War. I had never seen any of them before, and Joan herself was pushed to put names to more than a few of the people in them. As she showed them to me, I snapped away with my iPhone, on the café table (spot the shadows); Joan will scan them properly for me when she gets back home.

Bajla and her husband, Towje Aron Szwarc, lived in Gombin, in Poland, and had a dozen children. A couple of them died in childhood, but most of the rest went on to have families of their own. Towje Aron died in the early 1930s.  Some of the children emigrated - to Panama, the US, and the UK - and thereby survived the War. Bajla and the others stayed in Poland, and all perished in the Holocaust.

The oldest of their children was Jankel, born in 1896 and a few years younger than his cousin, my grandfather Lajb. The two cousins both came to London in 1913, where Jankel became Jack Schwartz, and Lajb became Louis Frankenstein. They remained in contact at least until the late 1930s.

Bajla came to London to see Jack in 1930, and stayed for three months, during which time she must have seen her nephew, Louis, and his family, including my mother, who would have been 10 years old. However we have very few photos from this period, and none that seem to be of this visit. So this is the first photo of Bajla that I have seen.

More than that, it is the first time I have seen a photo of anyone in the generation before my grandfather.

PS:
By the way, this is at least the third time that I have been 'found' by a previously unknown cousin googling for one of their own ancestors, and coming up with a page I had written that named the person they were looking for. See Cousin Report #27, for example.
Posted by Michael Shade at 22:15