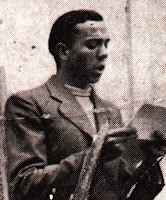 Fri 26 Feb
Orihuela
This year is the centenary of the birth of Miguel Hernández, one of the major Spanish poets of the 20th century. Despite his youth he became one of the leading cultural figures of the Spanish Republic during the Civil War (1936-39). In the aftermath of the war he was imprisoned, and died in jail in 1942, aged 31.
He was from Orihuela, a small town in SE Spain, and my friends there are involved in the Asociación Cultural Orihuela 2010, which is promoting and organising all sorts of events to mark the centenary. I went over this weekend to discuss the possibility of participating in some way (more on this later), and was amazed by the amount and variety of activity going on, and even more impressed by the sheer quality of it all.
I'll be posting here as things come up, starting with a few brief reflections on what I saw this weekend.
Posted by Michael Shade at 22:18