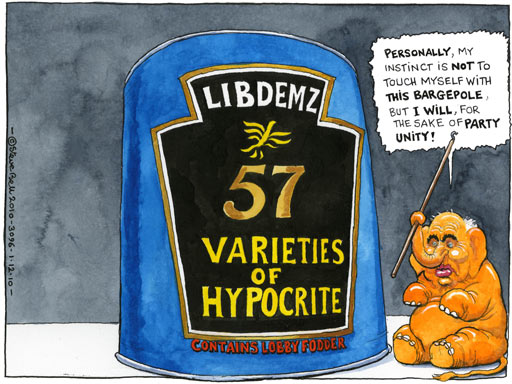 (from today's Guardian)
For those not familiar with UK politics:
- the Liberal Democrats have 57 MPs (members of parliament)
- they are propping up the Conservatives in a coalition government
- during the general election campaign earlier this year they promised to abolish students' tuition fees, if elected
- they won a number of university town seats on the back of this pledge
- the senior Liberal Democrat Vince Cable is the minister in charge of the government department which is currently introducing a huge rise in tuition fees, alongside a massive cut in the funding of university teaching
- a wave of student occupations and demonstrations is taking place all over the country against these cuts and charges
- one leading Liberal Democrat said the pledge was 'a legitimate position for an opposition party', but 'a very different position for a party with responsibility' (see dictionary definition of hypocrisy below)
- many Liberal Democrat MPs are getting cold feet over the parliamentary vote on this issue, due next week - should they vote for? against?? abstain??? individually???? all together?????
- the Guardian cartoonist Steve Bell does Cable as a baby elephant
- Heinz (of baked beanz fame) used to boast they sold 57 varieties of tinned food
- the Liberal Democrat logo is a bird with far too many wings - or is it a worm?
- the lobby is where MPs go to cast their votes in the House of Commons
- 'lobby fodder' is an expression used to refer to MPs who always vote the way their party tells them to
- hypocrite: when someone pretends to believe something that they do not really believe or that is the opposite of what they do or say at another time (Cambridge Dictionaries Online)
They say a picture is worth a thousand words - well I've used over 250 here but I'd far rather look at Steve Bell's cartoon . . .
Oh, and by the way, I - and I'm sure many others in Lewes - will be very interested to see how our own Liberal Democrat MP, Norman Baker, votes on this issue.
Posted by Michael Shade at 23:08