Mikileaks: New Lottery - how it works 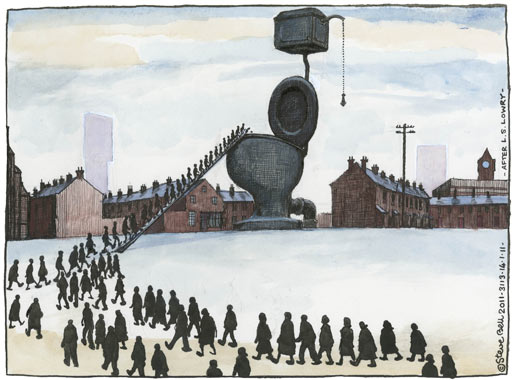 Our moles have been burrowing away, and can now reveal how the Demolition Government's much-vaunted new nation-wide Lottery Scheme works. Mikileaks locked researcher Steve Bell away for a couple of minutes with the scheme's source code - scribbled on a torn-off scrap of 'Number 11' headed notepaper, and rescued from the bin beside the photocopier - and he has come up with this graphic representation of the process. He says it wasn't that hard to crack, as the first line of code reads:
{Top Secret: GO says 2000 Mancunians down the pan, and pronto!} *see Note 1
It therefore came as no surprise to us to see amongst this week's lucky winners:
Manchester!
Manchester council attacks government as 2,000 jobs axed
However, do not despair if Lady Luck hasn't called on you this week. For wherever you live, and whatever your circumstances (with some notable exceptions - *see Note 2), they've got your number, and it could be drawn any day now. It could be your turn next!
Remember - We're all in this together!
*Note 1: There are conflicting rumours as to the identity of 'GO'; some analysts suggest that he may well be the mysterious character seen scurrying across the steps of 10 Downing Street in this videoclip.
*Note 2: Some experts claim to have detected certain regional and social biases in the coding of the scheme, which seems to be stacking the odds strongly in favour of 'Northern towns' and 'poorest areas' at the moment:
Northern towns 'targeted' with cuts
Councils say poorest areas will be worst hit by cuts
And if you wondered what this picture was doing at the top of our original article, see:
Police may stage street protests over cuts and job losses
Police force's colour-coded redundancy letters give staff the blues
So when the police take to the streets with their face-masks and home-made placards - who will do the kettling?
NB: Steve says his illustration is 'after LS Lowry'; of course it is - Lowry died over 20 years ago. He painted scenes, full of sympathy, of the ordinary lives of ordinary people in his home town of Salford, including Going to Work and Coming home from the mill. Would he qualify for an arts grant today?
According to our maps, Salford is quite near to Manchester, and so probably qualifies both as a 'Northern town' and as a 'poorer area'. Some folk have all the luck.
Posted by Michael Shade at 00:12