Heroes of the Ghetto 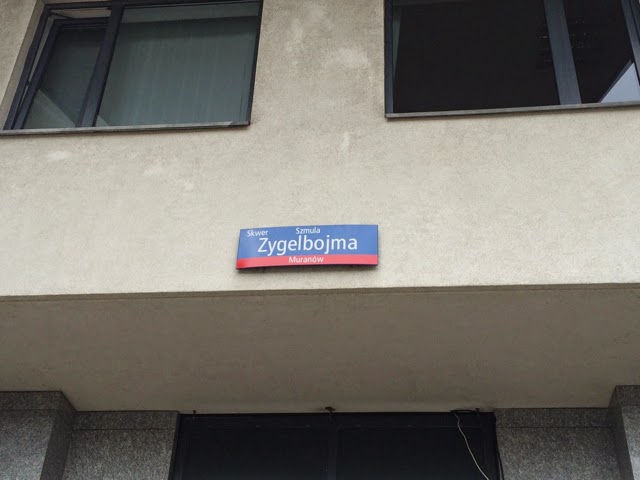 Several hundred thousand people were forcibly crammed into the Warsaw Ghetto, and then, after 18 months of terror and starvation, all but a few were transported to their deaths. We know little about their lives in the Ghetto, nor where, when or how most of them died. There are few individual accounts, and few individual memorials.

The City of Warsaw has honoured some of the heroes of the Ghetto with memorial stones or street names, and while I was there in June a 'Garden of the Righteous' was inaugurated in one of the city's parks. This commemorates those who "had the courage to defend human dignity and truth, and help victims during totalitarian times and genocides", anywhere in the world. The first people honoured there include several who were involved in the Polish resistance to the Nazis, including in the Ghetto. 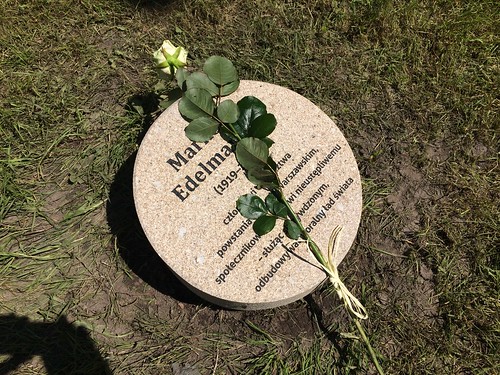 Marek Edelman was a leader of one of the sections of the Bund, the leading Jewish Socialist political party, within the Ghetto. He became leader of the Ghetto Uprising in 1943, and when that was crushed and the Nazis burned the Ghetto to the ground, he escaped through the sewers to the 'Polish' part of the city, and took part in the Warsaw Uprising in 1944. Shortly after the War he published a memoir, The Warsaw Ghetto Uprising, which is one of the few first-hand accounts that survived. 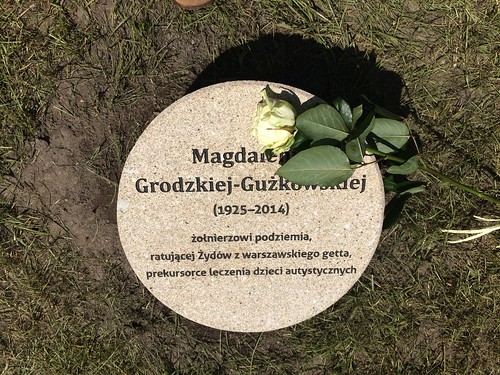 Magdalena Grodzka-Guzkowska worked for the Polish Resistance from the age of 14, helping to identify Poles who were collaborating with the Nazis. She helped Irene Sendler rescue Jewish children from the Ghetto, and fought in the Warsaw Uprising. 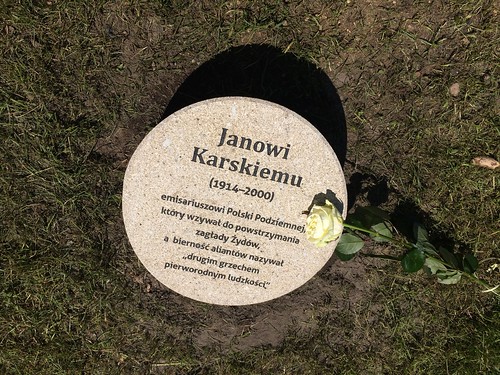 Jan Karski was a member of the Polish Resistance. He was sent on several secret missions to London and to the USA to inform the Polish Government in Exile, and the Allied Governments, of the situation in Poland. He was smuggled into the Warsaw Ghetto to see the situation at first hand, and also managed to see the holding camp for the Belzec extermination camp. His reports were presented to the Allies in a note titled 'The Mass Extermination of Jews in German Occupied Poland'. He had meetings with British Foreign Secretary Eden, and with US President Roosevelt. However the Allies did not appear interested, and took little or no action.

The street sign at the top is for the square named after Szmul Zygelbojm, a leader of the Bund party and its representative in the Polish Government in Exile, based in London. He managed to escape from Poland in December 1939, and spent the following years trying to persuade the Allies of the dire situation of the Jews in German-occupied Poland. When the Warsaw Ghetto Uprising was crushed, in May 1943, and he learned that his wife and son had been killed there, he committed suicide in protest at the indifference of the Allies to the fate of the Jews. One of the hidden milk-cans

Emanuel Ringelblum was a historian, specialising in the history of the Jews in Poland. In the Warsaw Ghetto he established 'Oyneg Shabbos' - 'Sabbath Delight' - a secret group dedicated to documenting what was happening to the Polish Jews. They collected thousands of documents ranging from personal accounts to scientific reports and Nazi decrees. As the destruction of the Ghetto commenced in 1943, they put the documents in milk-cans and metal boxes, and hid them in the cellars of a number of Warsaw buildings. Ringelblum managed to escape from the Ghetto with his family, but they were discovered and executed along with the Poles who had hidden them. In the years after the War some of the boxes and milk-cans were discovered, but there are still some that have never been found.

Ringelblum's diary notes were published in English as Diary of the Warsaw Ghetto (this is only a brief extract). There is an excellent lecture on his life by Henry Abramson: Emanuel Ringelblum and the Warsaw Ghetto. The Jewish Historical Institute in Warsaw is named after him.

Wladyslaw Szengel was a poet, journalist and songwriter before the War, and he continued these activities in the Ghetto. There is an account of his life on the web-page Wladyslaw Szengel, and a few recording of his songs. See Władysław Szlengel - The Ghetto Poet for poems in Yiddish, Polish, and in English translation, including some very powerful evocations of life in the Ghetto. He was killed during the Warsaw Ghetto Uprising in 1943.

All of these people are undoubtedly heroes, who risked their lives time and time again, and devoted themselves to saving others and informing the world against enormous odds. There are doubtless many more, just as heroic but less well-known. But Marek Edelman regards those who were sent to the death camps - all 300,000 of them - as the real heroes:

"We knew perfectly well that we had no chance of winning. We fought simply not to allow the Germans alone to pick the time and place of our deaths. We knew we were going to die. Just like all the others who were sent to Treblinka.... Their death was far more heroic. We didn't know when we would take a bullet. They had to deal with certain death, stripped naked in a gas chamber or standing at the edge of a mass grave waiting for a bullet in the back of the head.... It was easier to die fighting than in a gas chamber."